Give it up Peter Pan 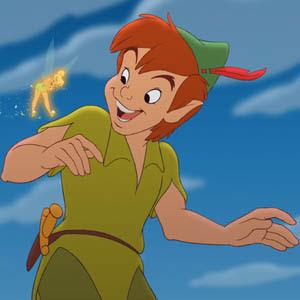 So, a new blog label begins ... I Vitelloni, stolen without remorse from Fellini's 1953 film about a group of hapless twenty something Italian males. A vitellone is a young calf (sometimes also used in Italian slang as a noun for a goofy male layabout).

How appropriate considering my conversation with two male friends recently over drinks about commitment to a partner and/or the obligations of marriage.

Strengthened by my two martinis at the College Street Bar, I was giving them a verbal once over about the reluctance to commit on the part of some men. One was engaged; the other, I think, will likely never marry.

We started discussing the film "Into the Wild" which I saw two years ago at TIFF and reviewed here. I really personally disliked the film but not on artistic grounds. It was not the quality of the acting by Emile Hirsch (wonderful) or the direction by Sean Penn (competent) or the beauty of the scenarios (stunning). It was the entire premise of the film based on a true story which irked me. It's difficult to be objective now when I see a film which involves parents and conflict with one's growing children.

I didn't think it was cool or brave or admirable for this young man, the real life Christopher Johnson McCandless , to go off on his own, literally burn his money, not tell his parents where he was living (or even if he was alive) and die alone on an abandoned bus in Alaska because he poisoned himself by accident. Not in the least. My male friends loved the film and seemed to find his actions brave, understandable, heroic.

I remain unconvinced of his bravery or even plain common sense. This segued into a discussion about commitment and the way men and women look at this issue. I asked them why marriage is seen by some men as a "ending" while women usually see it as a "beginning". For men it sometimes appears as the end of freedom or the end of "doing what you want to do". "Like what?" I asked. They both named things that they enjoyed but that they feared their partners would not like to do and so prohibit them from doing: serious hiking, cycling, ice fishing, camping etc ...

For women (not for every woman of course), it is the beginning of a new family (not necessarily a biological one), a time when you command your own fate, possibly have children, build a life together, try to be happy, healthy and prosper in your given field and community, form emotional bonds with someone other than your immediate family. Hopefully, when we find a partner or a husband we don't start thinking, shoot I can't go clubbing anymore. I can't see my girlfriends, now I will be boring, now I will be restricted in all of my actions.

"So," I said emboldened by vodka and sarcasm, "when you are eighty ... you want to have a woman that will accompany you ice fishing or, at least, let you go by yourself? Not someone who will be a good partner or reliable or true or a good listener? Someone that will go rock climbing? Or camping? That's the criteria?"

We were quiet for while after that. I came on too strong, I think, but this Peter Pan syndrome annoys the proverbial heck out of me. I'm pretty sure that when my father wanted to marry my mother it wasn't because he thought she would let him do what he wanted all the time. I think there was other criteria involved: loyalty, fidelity, being good to one's family, physical attraction, being loving, being a good mother, being smart and sensible ...

One friend had said to me that night, "I want to do what I want to do when I want to do it." Really? Well, that's not the definition of a marriage or a partnership. What, you want to be alone for the rest of your life? I don't believe that.

One time I was watching a high powered yenta on a reality series who hooked up very affluent people who claimed they were unable to find partners. When they balked at her choices for them, she would literally bellow at them: "Do you want to die alone??" It was harsh but I sometimes feel like saying (rather bellowing) this to some people in similar situations.

I believe that these guys may have a sincere disdain for traditional marriage or that they might have many serious partners over the course of their lives which, of course, is completely fine. But I don't believe anyone truly wants to be alone. I don't buy it. And I think that behavior is a prescription for loneliness.

Of course, it was different for my dad back in the day. Think of Mad Men's Don Draper's attitude toward women and their domestic role but not as suave or good looking. I am not saying that Don Draper is the ideal man by any means but he does serve as a sort of archetype that is disappearing (some might say good riddance).

I never heard my father whine about his responsibilities or duties. He held two jobs, worked six days a week, never had a vacation in his adult life and supported various family members in Canada once they emigrated until they got on their feet. I'm not saying this was a particularly nice guy or a saint (by no means) but he wasn't a whiner and he had very strong sense of responsibility towards family and his partner.

However, my mother did give him a very wide berth in terms of his social activities. Partially it was because he was not the kind of person you could tell what to do; as well, she truly believed that men were the head of the family (she still believes that); and, thirdly, I think she recognized that he worked very hard and needed time to himself.

I think the key to being together for a long time is respecting the other person's idiosyncrasies and interests. Nothing makes R happier than sitting in a ice rink watching J play or playing hockey himself.

I would rather sit with a book reading and writing more than anything else besides being with R and J. I can't imagine if I tried to limit R's playing or watching hockey - how miserable he would be! How frustrated! And if he pressured me to spend less time writing and reading this would create a great deal of conflict and anxiety for me as well.

I wanted to say to my male friends that night: grow up! Being an adult is taking on more of life, not fewer responsibilities. Not just doing what you want but doing what you have to do. And who wants to be with a woman that lets you do whatever you want? Who wants a pushover? How boring is that after five minutes?
Posted by A Lit Chick at 8:57 AM