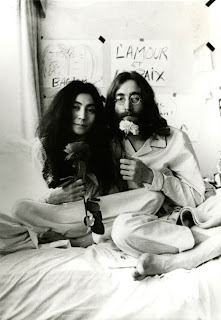 We only really had half a day on Sunday as I was to read at 3.30 at the Blue Met. What to do in that short time? I really wanted to see the "Imagine" exhibit at the Montreal Museum of Fine Arts. We checked out and drove there. Yoko Ono has put together the exhibit. (Side note: Yoko's name always brings to mind a playful little phrase in Italian that everyone of my generation knows: Gioco poco ma gioco (I play a little but I play)).

The exhibit was amazing, I'm glad we didn't miss it ... it detailed the 1969 Bed-In for peace at the Queen Elizabeth Hotel in Montreal. All in black and white, set in a number of starkly white rooms. There were wonderful b&w photographs, audio recordings, videos, music, posters, reproductions of Ono's art exhibits, anything and everything to do with the bed-in and their life before and after.

The best art exhibit was a white phone attached to the museum wall. Everyday, at a random time, Yoko Ono calls the museum and speaks to whomever answers the phone. We had missed her by eight minutes - how wild would that have been to speak to her? The only sour note was the overpriced merchandise at the end - $40 for a small T-shirt saying "peace"- never mind peace, give us a chance lady!

We drove to Rue St. Denis - but what a disappointment. I remember funky and interesting shops, eclectic and fun. What we found was tacky and uninteresting. Is it the downturn in the economy or have our tastes changed? I remember loving this strip not so long ago. I left my true loves on Rue St. Denis and made my way to the Delta Hotel with a fresh change of clothes and a nervous stomach for my session at the Blue Met. As I feared, the hotel was much less busy as this was the last day of the festival and one of the second to last events scheduled.

I found myself in the hospitality room with a noted Quebec broadcaster - something about him, his noblesse oblige manner with me or the flutter of females asking if he was comfortable? wanted tea? needed water? put me off and the condescending way in which he asked me what role I was to play at the festival. I immersed myself in my piece and tried to ignore him. The only other occupant of the room was a very quiet woman who sat like a statue and politely declined conversation or the offer of a drink. Later I realized this was the same woman who had sent me a prim letter of corrections of the Italian in the volume of the Descant issue on Venezia I co-edited in 2005 (I had never met this woman only corresponded by e-mail with her).
We made our way to the St. Laurent room where the panel was being held. I texted R when I got there: "No one here!" Let me put it this way ... if Nino's panel had about 200 eager attendees we had less than a tenth of that number by the session's end. At one point I glimpsed the publisher of a small magazine on Italian culture in Montreal whom I wanted to review my book slip out the door ... oy vey.

Although we were few in number, I thought the questions were thoughtful and intelligent. The discussion was lively too.
The lone male on the panel managed to monopolize the dialogue as I clearly remember he did on the last panel. Back in 2006 at the Blue Met, he helpfully answered a question that was directed to me. This time, when the host Maria Spina tried to direct a question my way he just talked over her and kept on talking ...

I was a bit demoralized by the number of attendees but was heartened at the end by R and J excitedly telling me that only one of my books was left in the bookstore. Astounded, after the reading we trooped to the store to do the book signings (ah, optimistic and sweet creatures at the Blue Met, they had chairs and our individual books on little pedestals at the table - what a lovely set-up). I soon realized that one of my books had been separated from its pile on another table so it only looked to R and J like I had sold most of them - it was slightly comic and sad, but mostly sad ... :)
I looked longingly at the huge line-up for the Iranian photo-journalist Reza's book at the book signing table. He was part of the "Writers in Peril" series moderated by my friend the Quebec broadcaster whom I met in the hospitality room. One day kid, one day, I thought wistfully ...
We needed to leave, it was after five and the next day was a regular school day for the sprout. As it was we arrived home close to midnight. It was a wonderful trip, mishaps, minor disappointments et al. Bonsoir ...
Posted by A Lit Chick at 12:58 AM

I'm glad the exhibition at the Montreal Museum will be there till June 21st. I'm definitely planning to go see it. I got very excited when I read about the telephone, it sounds like a great idea. Maybe I'll get lucky and pick it up when she calls :), sure would love to have a chat with Yoko. Anyways, I'm glad you're liking Montreal. Have a nice day,

Hi Lorne, were you at the Blue Met Fest or just an enthusiatic Montrealer?

Nope, did not attend the Fest. I'm actually from Toronto but I love the Montreal Museum and their exhibits. I keep an eye on their website and always visit whenever they have a new interesting exhibition. Looking forward to this one:), and of course I love Montreal, I think it's a beautiful city...