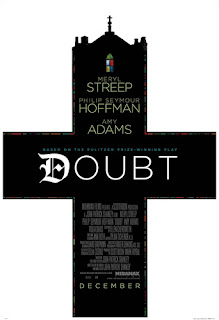 A potentially abusive priest? A cold, vindictive nun? Catholic schools in the 1960s? Meryl Streep? Philip Seymour Hoffman? Oy ... did I want to go down this well traveled road? Have we not had enough stories of priests and violated boys? My friend B convinced me see the film. Despite my reservations, I'm glad I did though.

I must say that I was impressed with the performances even though I am not a huge fan of the two aforementioned actors. This is potentially a treasonous opinion, I imagine, from a self-professed movie lover.

The ambiguity of the situation saves the film for me ... did Father Brendan Flynn (Philip Seymour Hoffman) abuse Donald Miller, the lone, often lonely, black student in the school? Was the relationship inappropriate despite the priest's apparent sincerely felt feelings for the boy? Was the boy a "willing" participant, if so? How complicit was his mother, Mrs. Miller (the Oscar nominated Viola Davis), who has a few very powerful scenes with the formidable Sister Aloysius Beauvier (Meryl Streep)?

Here, for me, Streep is free of those nervous acting tics which annoy me ... please don't ask me to number them. It's like that 1964 Supreme Court definition of pornography: "I know it when I see it." At times she seems the only actress of her age who seems to be employed. Sigh.

But she is formidable here and seems eerily familiar to this former Catholic school girl. The icy precision with which she tracks down every errant boy or girl in the school or in church. Her cold and unforgiving nature. The fact that she never smiles, never warmly greets a child, never shows tenderness or love put me in mind of our very own principal in grade school, Sister M, a severe nun in traditional habit, feared and hated by all (including the teachers). That's how terrifying she was, even the kids realized that the teachers hated her.

Sister Aloysius is frighteningly self-assured in her crusade to destroy the charming Father Flynn and almost persuades the tentative but spunky Sister James (Amy Adams) of her certainty. Sister James has doubts of her own but cannot side against the warm, charismatic Flynn who has a genuine love for the children and is trying to introduce a level of progress into the stultifying atmosphere of the school in 1964. Adams is graced with a beautiful face which can still convey, in these cynical times, innocence and grace. She is perfectly cast. Her star turn in Enchanted (2007) as the fairy tale princess come to life brought her well deserved acclaim and attention.

But if Flynn is innocent - and not even Donald Miller's mother is sure of this - why does the camera linger on a certain boy who recoils from any physical contact with the priest and revels in his potential demise when he learns of it? Is it just childish malice or a secret knowledge of the true situation?

The film is so good that I forgive Shanley my long standing grudge against him for the atrocious Moonstruck (1987).
Posted by A Lit Chick at 9:41 AM