Cabaret at the Stratford Festival 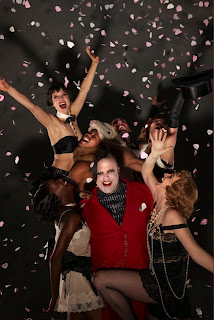 The musical, as presented here at Stratford, is certainly much darker than the film. Originally based on the short stories of Christopher Isherwood drawing on his experiences in Weimar Germany in the early 1930s between the wars and published as Mr Norris Changes Trains (1935) and Goodbye to Berlin (1939).

These books were the inspiration for John Van Druten's play I Am a Camera in 1951, the subsequent British musical Cabaret in 1966 and the Bob Fosse film of the same name in 1972.

The plot still resonates today ... In December 1929, a young, naive and closeted American writer Clifford Bradshaw (Sean Arbuckle), Christopher Isherwood in the original play, comes to post-WWI Berlin in search of adventure. He meets Sally Bowles (Trish Lindstrom), an English cabaret singer working at the Kit Kat club. A little sleuthing on the Internet reveals that Sally was based on the British actress Jean Ross (please see end of blog entry for more info).

Here, the nationalities as depicted in the film are reversed: Cliff is American, Sally is English. Perhaps it was necessary to emphasize the differences between the two but oh what an awful accent Lindstrom has ... harsh and inauthentic and uneven. Coupled with the histrionic arm gestures and mannerisms, she nearly capsizes the musical. All these manic gestures meant to convey vitality and spontaneity ... Sally was flamboyant, flaky, not crazy. Where is the director Amanda Dehnert here? It takes away from her lovely singing voice and competent dancing.

The emcee is played by Bruce Dow - lewdly, wonderfully, intelligently - how difficult it must have been to try and assume a role played so expertly by Joel Grey in the movie! Dow so totally made it his own here. He is alternately tantalizing and not a little sinister, many times silently surveying the carnage that ensues.

Arbuckle seems to have the right qualities: vulnerability, a strong voice, emotion, physical grace ... but there is a certain quality that continues to annoy me, particularly in the male actors in these musicals which I guess is why we (R and I) avoid them. Is it merely playing to the back seats - the expressions are so big, so unnatural at times, that it takes away from the performance.

True, film is not theatre and one should adjust one's acting style accordingly but if I could detect this from the last minute nosebleed seats in the balcony we purchased ...

All the great songs are here: "Two Ladies", "Cabaret", "Mein Herr", "Wilkommen", "If you could see her" and "Tomorrow belongs to me" echoing the themes of the play powerfully, beautifully. You can here snippets of the songs from the film here.

The costumes designed by David Boechler are gorgeous, bawdy and appealing for the Kit Kat Club crowd and appropriately modest for Cliff, Frau Schneider and Herr Schultz.

Clifford is swept up into the "decadent" night life of Berlin and by Sally Bowles. The music and dance sequences are wonderful, easily as captivating as the film which we both loved (when we got home I rushed out and rented the DVD of the film and we watched it again).

Sally becomes pregnant, unsure if it is Cliff's child, but Cliff makes a commitment to care for all three of them despite his conflicted sexuality.

Neither are interested in German politics but soon become embroiled in the ugly manifestations of anti-Semitic sentiment. This undercurrent of danger and the evils of Nazism is underscored by the relationship between Fraulein Schneider (Nora McLellan), the landlady of the boarding house where the two meet, and her boarder Herr Schultz (Frank Moore), the fruit merchant, who is Jewish. The two are wonderful, seasoned actors who play the roles with delicacy and emotion, especially Moore.

In the film, the dilemma of the couple is represented by the more photogenic Marisa Berenson as the Jewish heiress Natalia Landauer and Georg Hartmann as the importunate Willi who disguises his real identity as a Jew.

Cliff is befriended by cultured, suave Ernst, who unbeknownst to him, is an active member of the Nazi party. They meet on a train and Ernst had provided important connections for Cliff.

Cliff quickly ends his friendship with the affable Ernst when he discovers he works for the Nazis. Fraulein Schneider breaks off her engagement to Herr Schultz because he is Jewish. You could have heard a a pin drop when one of the characters casually states "After all the Jews have all the money".

"Tomorrow belongs to me", a sort of pro-Germany Nazi anthem, still sends a chill down my spine especially when actors, dressed in Nazi uniforms and planted in the audience, rise and join in the rousing final choruse.

The ending is appropriately disturbing. Cliff leaves Sally behind at her own insistence despite his desire to take her to America. Oblivious, Sally wants to remain in Berlin, to continue entertaining, unaware of how quickly Germany is changing. Homosexuals, Jews, prostitutes, foreigners, anyone who threatens the racist, xenophobic creed of the Nazis will be destroyed in the ensuing years.

This from www.curtainup.com/cabaretlond.html on Sally Bowles:
"The character of Sally Bowles was modeled after nightclub singer Jean Ross, who starred in a stage production of Offenbach's Tales of Hoffmann. The play tells the tale of a Venetian courtesan, and Ross bragged that she not only simulated sex onstage, she actually carried out the acts in full view of the audience. Isherwood reportedly attended several shows with binoculars in tow to witness Ross' onstage escapades, but was never able to prove her claims. Ross and Isherwood were romantically linked for some time, but never married. Ross died in 1973."
Posted by A Lit Chick at 1:32 AM