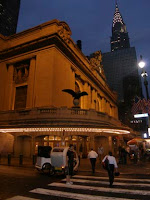 His list of enchanted objects had decreased by one. His hopes and dreams came true (or so he thought), so the green light lost its magic. The Great Gatsby (1925)
Thursday July 5, 2007: Day One in New York
At the beginning of Chapter IV of F. Scott Fitzgerald's The Great Gatsby, Nick Carraway, its narrator, lists all the guests that appeared at Gatsby's mansion on West Egg in Long Island on July 5, 1922. Charmingly enough, we arrived 85 years to the day of that fictional party.
And luckily, my list of enchanted objects grows (and does not diminish) each time we visit NYC. I knew when we planned our trip to New York that I wanted to re-read The Great Gatsby which I read every summer. There is something about the steamy Toronto summers that remind of that fateful day when the main characters Jay Gatsby and Daisy Buchanan, Nick Carraway, Jordan Baker and Tom Buchanan go to NYC to escape the summer heat of Long Island. I thought it might be fun to trace the locations that Fitzgerald mentions in his book while we were there. Beautiful, flawed, overwhelming, wondrous New York.
My superstitious Sicilian nature forced me to do two things before I left though: I hurriedly finished Don DeLillo's Falling Man, a fictional novel about post-911 New York (more about that anon) and I consciously avoided watching Oliver Stone's World Trade Centre which has just appeared on the specialty channels. I didn't want to think about either while I was there.
We left for a four day holiday with J, our daughter. It was her first time to New York and we wanted her to see the great landmarks of the city. We thought she was old enough to appreciate the beauty (and intensity) of the city and there were places that we had not explored since our first trip there in the 1980s.
We were being joined by family a day later so we had the first day to ourselves. We stayed at the Grand Hyatt at 109 East 42nd Street at Grand Central Station. In a mythical 42nd Street cellar, Nick Carraway meets Meyer Wolfsheim, who was said to be based on the real life gangster Arnold Rothstein. Fitzgerald seems to describe Wolfsheim with an unsavoury anti-Semitic glee.
Our hotel is situated above Grand Central Station which gave us a chance to see it again on our first day. I have to say that, even as a Canadian, I find the gigantic American flag in the middle of the station tremendously moving. With the expanse and beauty of the structure of the building, you also get a sense of the adventure of travel, the excitement of the journey and the marvel that was probably felt by travelers when the building was constructed at the turn of the 20th c. You can see more of it here.
The Station also reminded me of the now demolished Pennsylvania Station on 33rd Street, a monumental 1910 Beaux-Arts masterpiece, which Fitzgerald mentions a few times in the novel. One of the more moving passages of The Great Gatsby is the description of the gathering of the Midwesterners at Union Station in Chicago at the end of the novel, as they disperse to go back home to the Midwest at Christmas time.
R found out about a coupon booklet called the City Pass that gives you discounted entry into six attractions which included the Empire State Building which we decided to tackle on our first day. We had been there once before in the 80s. Oh what 911 has wrought ... when we last went many years ago I remember sailing into the building, going directly to the 86th floor observatory and leaving with ease. Security is now in place with metal detectors and photographers cataloguing everyone that arrives as is true with most of the popular historical landmarks. This (and the intense crowds of tourists) made for a visit that was about two hours long in sweltering NYC summer heat with literally hundreds of tourists in front of, and behind us, in the long line. Luckily J, who had been forewarned that there might be these sort of delays was able to ride it out. As beautiful as the building is, it was disappointing to visit it in the middle of the interior renovations that were underway.
That night, we found a great Japanese restaurant that night not far from the hotel and down the street from the New York Public Library and Bryant Park purely by chance due to my partner's quick observations. Chiyoda Sushi is located at 18 E 41st Street just south of the Grand Hyatt. The menu is a bit limited but the quality is very good. Try the sashimi menu ... seems to be a family operation based on the resemblance between our waiter and the sushi chef!
Posted by A Lit Chick at 12:22 PM