Bury my heart at Satriale’s 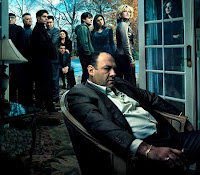 Oh my friends, I couldn’t have been more off on my predictions regarding the concluding episode of The Sopranos.

Instead of Tony offing his therapist Jennifer Melfi as I predicted we were left with … what? David Chase, the creator of the show left the ending so open ended that it left many a viewer sputtering and fiddling with the cable or satellite dish in utter bewilderment. Although we did have the satisfaction of seeing Tim Daly's smarmy TV writer meet his end in an earlier episode.

The episode on June 9th ends with the Soprano family (immediate not criminal), Tony, Carmela, Meadow and AJ at the famed Holsten's diner in New Jersey for an evening meal. Every indicator in the previous eight episodes suggested ever more frightening alternatives …

A hinted at Islamic inspired terrorist attack; Phil Leotardo’s crew assassinating Tony et al; AJ fulfilling his pledge to kill himself; Bobby or Christopher (before their deaths) exacting revenge on Tony for his treachery and cruelty; Paulie Walnuts turning against the family like made guy Pussy Bonpensiero before him; a belated last attempt by Uncle Jun to eliminate Tony; Meadow now involved with the son of made guy and the target of some lascivious harassment by another; sister Janice unleashing her barely suppressed sibling rage at Tony as she had with her deservedly dead lover Richie Aprile.

The possibilities were endless and endlessly disturbing.

We also have Meadow painstakingly trying to parallel park her car as the family waits adding to the tension and fear that she will be eliminated as was the unfortunate Sofia Coppola character before the eyes of her devastated father at the end of Godfather III.

As Meadow enters the diner finally, the screen dissolves as if a plug has literally been pulled. And honestly, I thought I had foolishly cut the episode off too early when I had taped it an hour before.

Not unike the mobophile geeks on slate.com currently debating the show and slavishly parsing every move made by every character in every episode in almost 50 blog entries so far, I too have pondered the meaning of that ambiguous ending since I viewed it last Sunday. Those three or four men, all high profile, highly intelligent and accomplished individuals reiterate plot lines, quote dialogue from the show and the Godfather movies like over stimulated teenage boys parsing the latest Star Wars film or action toy (and sound just as geeky doing so too).

Does the episode's abrupt ending signify Tony's death, from his POV, as foreshadowed by Bobby's proclamation in the first episode of the season that "You probably don't even hear it when it happens."? Even in the most optimistic of scenarios Tony will be indicted on the ever looming gun charge. Carm will be virtually abandoned with Tony in jail, Meadow in law school and on the cusp of marriage. Carm will be saddled with the volatile and depressive AJ. Bobby and Christopher are dead, Silvio is in a coma, Carlos likely to testify against Tony; Paulie is reluctant to play the good soldier. Janice will likely lose her step-children to her in-laws with Bobby's death. Uncle Jun is sliding into senile dementia.

The "family", both immediate and criminal, is in shambles.

Reviews have been mixed: from disappointment to accolades regarding the ending. Will we ever know what truly happens to Tony Soprano? Despite Chase's teasing, elusive ending I hope he gives us one more whack at what becomes of il capo di tutti i capi.
Posted by A Lit Chick at 4:50 PM