The Death (and Rebirth) of Venus 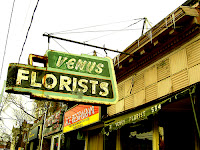 The April 14, 2007 edition of the National Post recently featured a short article on the disappearance of the Venus Florist signage on Roncesvalles Ave. in Toronto. This brings to mind a long ago vow that I made to one day walk around the city and and document all the old signage in Toronto that appeals to me and that will eventually disappear. The Venus signage would certainly have fallen into that category.

The Venus signage reminds me a great deal of Hamilton where I grew up during the 70s. Parts of the city have (or had) a real small town feel with signage of this type. The decay and lack of maintenance of the sign certainly fueled that feeling of nostalgia. I remember my pre-teen meanderings through the downtown core. The Lister Block was directly across from the Eaton's Store with its exquisite Christmas window and right around the corner from the Farmers Market. I regularly window-shopped along the the ground floor of the Lister Block where there were a number of small retailers of various wares: shoes, clothing, food, books. Small and charming, if a bit down in the heel.

The current controversy about preserving the Lister Block in downtown Hamilton is a sad reminder of the deterioration of the downtown core of Hamilton. You may read a bit of the history at this link above. It was erected by Joseph Lister on the corner of King William and James St. in 1886. Since then it has suffered a series of setbacks, most notably three separate fires in 1996. The building, although owned by the Laborers' International Union of North America (L.I.U.N.A.) since 1999, is apparently abandoned and uninhabitable at present.

In early April 2007 it was reported by the Hamilton Spectator that the city is awaiting a funding proposal from the province of approximately $8 million to refurbish and maintain the building.

I write this from a tiny Japanese restaurant on Baldwin St. in Toronto which is not bereft of its own charms. Here's to preserving our history, taking action and taking out our cameras before there is nothing left to photograph.

Great News!! I just got this message on April 26, 2007 from Andrew regarding the Venus signage: "What became of the Venus Florist sign is an odd story ... we saved it six weeks ago from being demolished. We are opening a new shop on Roncesvalles in the next few months and will likely install it there in hopes of returning it to the community. I agree with you about the shocking lack of interest in the fate of our visual icons and architectural history."

Please keep us posted Andrew!
Posted by A Lit Chick at 1:44 PM