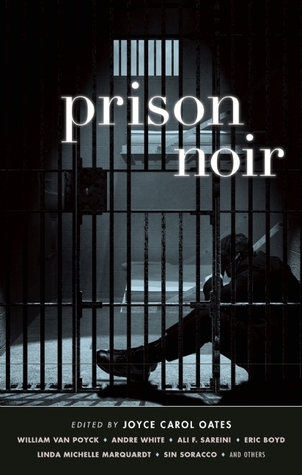 There is an intensity and melancholy that shines through these fifteen short stories, all written by prison inmates incarcerated throughout the U.S., and edited by the inestimable Joyce Carol Oates. The stories are accompanied by a listing of where the inmate is interned, complete with a map showing where the prisons are.

Noir is a passion of mine, in film and literature, but these woeful tales of prison life have the added piquancy of being written by men and women who have seen (and experienced) some extraordinarily frightening things before entering prison and while incarcerated. I can only assume this when one views the length of their sentencing, for some as long as 25 years. I think one can assume the crimes that landed them there are serious.

The collection leads with Al Webber's struggle with his new "cellie" or cellmate (Christopher M. Stephen's short story "Shuffle"). Long an inhabitant of solitary confinement, Al is angered and mystified by his new cellmate. We, the readers, are as alarmed as Al when we learn the cellmate's true identity.

The inmate in Eric Boyd's "Trap" frees a mouse from a trap on a work detail and one can't help empathizing with both as the prisoner tenderly washes then frees the mouse from his confinement. Boyd's photograph disturbingly resembles any, or every, aspiring young writer.

As a caregiver, Ali, a practicing Muslim, euthanizes (some might argue murders) ailing and dying prisoners in order that they might deliver his plea for freedom to Allah when they reach paradise (“A Message in the Breath of Allah” by Ali F. Sareini). In the end, Ali must deliver the message in person.

One can't help imagining the fiction emulating fact - the foreign-born teenager who misunderstands when he will be released thinking he will leave prison at 22 rather than serving 22 years for drug offenses ("Immigrant Song" by Marco Verdoni); a particularly attractive young prisoner who becomes the target of lust and violence ("Angel Eyes" by Andre White); the Green River serial killer's "autograph" is stolen to be sold on eBay by a fellow prisoner ("How eBay nearly killed Gary Bridgway" by Timothy Pauley); and, a serial killer of killers in prison who manages to kill dozens if not hundreds of prisoners ("3 Block from Hell" by Bryan K. Palmer).

Most compelling, and disturbing, for me is Linda Michelle Marquardt's "Milk and Tea" where an inmate serving a sentence for killing her abusive husband recounts her troubled history and quietly plots the poisoning of her annoying cellmate, nicknamed American Idol for her incessant religious singing.

Of course the ethical issues surrounding the inmates writing arises - some might argue they do not have a right to write and be published. Should they be compensated for their writing or only if they do not write about the crime they committed? Are prisoners entitled to free expression or is this another right they lose once they commit a crime and are imprisoned for it like losing the right to vote (felony disenfranchisement)?

Another concern comes to mind ... should I, as the reader, know the nature of the crime committed by the writer (I couldn't help wondering). But then would I make that demand of another writer - to know his or her personal history before I read their work? No, I wouldn't. I would be curious but I would have no right to know.

Lastly, I can't help contrasting these pieces with another recent short story collection by James Franco I read (yes, that James Franco). The hapless Palo Alto kids in his eponymously named collection are equally violent, careless, perhaps even doomed, yet their middle class sheen and youth somehow make them sexier, less menacing, and therefore somehow less culpable than the protagonists depicted here in Prison Noir.
Posted by A Lit Chick at 8:42 AM