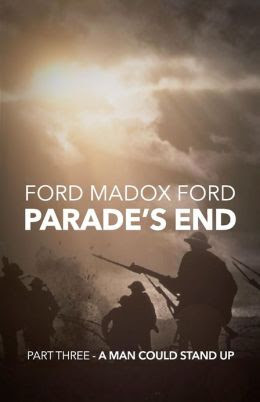 In the trench you could see nothing and noise rushed like black angels gone mad ...

I love this 1926 copy of  A Man Could Stand Up I acquired from the library,  which is literally falling apart in my hands. I like to imagine a Canadian soldier having held this same book, assessing it, and determining that yes (or no) "This is what the late war was like ..." as Ford muses in the preface of this book.

And so our saga of our benighted hero Christopher Tietjens in Book Three continues .... please see reviews of Book One here and here.

The novel begins on November 11, 1918. WWI has just ended. Valentine Wannop is working as a "physical instructress" at a private girls school. Valentine is contemplating her future. Nearly 100 pages are devoted to Valentine's receiving a phone call from her former friend Edith Duchemin (now Lady McMaster) offering to bring together the two thwarted lovers - Christopher and Valentine. She is told that Tietjens is in a nursing home and appears to have been abandoned by Sylvia his wife, that he is penniless, mad, that his new home is empty and deserted. Valentine is wondering about Edith's motivations. This is the whole of Part I. Perhaps this is why Mr. Ford may alienate potential new readers ... but stay with us my friends.

As Part II of A Man Could Stand Up begins, Tietjens is still at the front, the end of the war is nigh. Tietjens is wondering idly that if he raises his head above the trenches would he invite gunfire from the Germans ... does he desire it or fear it one wonders? It gives great meaning to the title. But, as with all the titles in this tetralogy, it has multiple meanings. For Tietjen's Sgt-Major in the trenches, "a man could stand up on a hill" refers to the freedom (and peace) of doing so without the fear of being killed.

Tietjens  has his challenges at the front: a mad and belligerent C.O. with whom he serves as second in command; a subordinate officer with a grudge (McKechnie) and a vicious tongue; a timid Lance-Corporal who reminds him of Valentine; the boy soldier Aranjuez who loses his eye before Tietjens; the spread of influenza and a lack of food undermining the troops ...

I have not read much war fiction but it seems to me that this book (as well as the second book in the series No More Parades) is particularly graphic and dispiriting about the ravages of war such as this chilling passage of a figures he spies in a no man's land between the Brits and the Germans:

And, suspended in them, as there would have to be, three bundles of rags and what appeared to be a very large, squashed crow. How the devil had that fellow managed to get smashed into that shape? ... There was also-suspended, too, a tall melodramatic object, the head cast back to the sky. One arm raised in the attitude of, say, a Walter Scot Highland officer waving his men on. Waving a sword that wasn't there ... That was what wire did for you. Supported you in grotesque attitudes, even in death!

And there is the casual cruelty of war that Ford captures so well as when a gunner chased "a fat miserable German" about the hillside.


His action, when he had realized that they were really attending to him, had been exactly that of a rabbit dodging out of the wheat the reapers have just reached. At last he just lay down. He wasn't killed. They had seen him get up and walk off later. Still carrying his bait can! His antics had afforded those gunners infinite amusement.

The war elicits hatred, as one would imagine, but perhaps towards a unforeseen object of dislike: towards civilians and its rulers: It was the civilian populations and their rulers that one hated with real hatred. Now the swine were starving the poor devils in the trenches!

Tietjens dreams of the day that he might be with Valentine - these are surprisingly modest aspirations:

He realizes that he can't live with Valentine at his ancestral estate Groby. His tenants and neighbours would sooner countenance a "doxy" (floozie) from the servants' hall than a "lady". They expect the bedding of a doxy from their masters but not a lady, daughter of his father's oldest friend, from whom they expect "quality" so he must search elsewhere for accommodations.

But united they are ... when General Campion swoops in and relieves Tietjens of his command sending him back home. Valentine meets him in his barren new home, even though she has not been invited, merely beckoned by Lady McMaster's disturbing telephone call. Valentine is joined, unexpectedly, by the "Pals" of the battalion who have agreed to meet here on Armistice Day: mad McKechnie, one eyed Aranjuez and his wife Nancy ...

Sylvia, pointedly, is not there, finally having given up hope of reconciliation. Will our hero be happy? On to Book Four The Last Post ...