Blood and the Blues in Nazi Germany 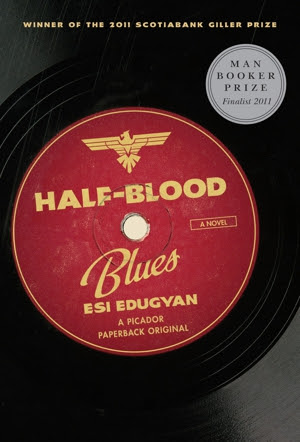 This tale is told by Sid Griffiths, a black American musician from Baltimore. As our story begins, two musicians enter a bar in Nazi-occupied Paris in 1940 - one, Hiero Falk, a mischling (who is half black, half German), the other, Sid, light skinned enough to "pass'. One is dragged out by the Nazis and disappears, seemingly, forever.

What happened to Hiero Falk (a.k.a "The Kid"), the gifted trumpeter, hailed by Louis Armstrong himself as "Little Louis", the next big thing in jazz?

Fifty years later, Sid the bassist, and, Chip Jones the drummer, in the jazz band called the Hot Time Swingers still don't know what became of Hiero, and if he died in the concentration camps as he was rumored to have done. The men are now in their seventies and worn down by their sorrows and old age.

The book switches to the present day ... Chip and Sid are invited to return to Berlin in 1992 to attend a tribute to Falk and their jazz band. The symbolism of the fall of the Berlin Wall in 1989 is not an inappropriate image for Sid's predicament, as he is forced to face the crumbling of his self-imposed silence on the days that led to Hiero's disappearance. In a documentary shown at the tribute in Berlin, Chip accuses Sid of doing nothing when Hiero was dragged away by the Nazis because he was jealous of him.

Just prior to the trip, Chip received a letter from someone purporting to be Hiero who had read that Chip was to be in Berlin where they began their careers and asked if Chip would come to Poland to see him. In Berlin, Sid begins to recall the days that led to Hiero's disappearance.

It's 1939, after a violent altercation with some Nazis on the street where one is likely killed, the musicians frantically go into hiding. Sid, Chip, Hiero, Paul the pianist, and Ernst the clarinetist, hole up in a jazz club called The Hound owned by Ernst who comes from a very wealthy background. They begin to seriously consider an offer that had been made to them to play with the legendary trumpeter Louis Armstrong in Paris put forward by a mysterious light-skinned Canadian named Delilah who sings with Armstrong. Sid falls for Delilah, badly. But he is uncertain how she feels about him, suspicious that she has an interest in Hiero.

After an uncomfortable night in the club, the band disintegrates. Paul, who is the lone Jewish band member and more at risk than the rest of them, insists on returning to his apartment to retrieve something that he won't name; Delilah, after sleeping with Sid, also disappears. Fritz, a German who has thus far eluded the Nazis, comes by the club to say that he is joining another band, the Golden Seven, much to the dismay of the other band members.

What remains of the band (the Americans Chip and Sid and the German born Hiero) decides to drive to Paris and take Armstrong up on his offer but they must secure visas first and seek the assistance of Ernst's father, a wealth industrialist living in Hamburg. In Hamburg, Hiero and Sid witness a terrible sight ... a human zoo called the Hagenbeck peopled with Africans dressed in rags and living in primitive conditions. With a shock, I verified that such places did exist in Europe as late as the early to early mid 20th c. And it wasn't the only one.

In exchange for their papers, Ernst has to make a vow to his father to remain in Germany so that his friends might escape. This means the end of a music career fro Ernst which is likely his father's intention. The three men travel to Paris and, unbeknownst to them, arrive the day that France declares war on Germany. Its citizens are in a state of dread and shock.

When the men arrive in Paris, surprisingly, they re-encounter Delilah (Sid still has no idea how or why she left) and she leads them to Louis Armstrong, who though ailing still wishes to record with them. Edugyan's physical description of Armstrong, while adulatory is razor sharp and poetic: "His bottom lip hung slightly open like a drawer of red velvets".

Armstrong decides to cut a record with the band but passes over Sid who doesn't perform well during a trial rehearsal. This sends Sid into a gloomy depression. It's an interesting twist ... our main character is deemed not good enough, is shunted aside, and that only increases his animosity towards the younger, more talented Hiero.

The men move in with Delilah in her apartment and Sid starts to turn against Hiero for withholding information about why Delilah left. As the Germans advance on Paris Sid fears that Delilah is in love with the Kid. He mistakes her concern for his illness and fragility as sexual attraction and this drives them apart.

Armstrong flees to Bordeaux and the remaining band members attempt to leave but are unable to get a train out of Paris which is flooded with refugees and Parisians desperate to leave. This is a harrowing, well wrought scene - depicting the desperation and horror the fleeing Parisians feel. In desperation they return to the apartment. They decide to cut the record without Armstrong in a primitive sound studio found by Delilah. The next day is the fateful day that Sid and Heiro walk into the bar ... that day changes the fate of all the band members.

Cut to the present day, Chip persuades Sid to find Hiero in Poland. They make an arduous journey to Poland by car and then bus to an obscure location where Sid experiences a feeling of dread. Poland is oppressive, still clearly under the yoke of Communism and the inherent paranoia it breeds. Why Poland? How did Hiero end up there when so many who survived traveled to western Europe or to the U.S.? How did he survive?

Sid is seeking absolution. What he finds in Poland shocks and moves him. We also learn the fate of all the other band members. It does not end how I expected it to end but it pleased me nonetheless.

The dialogue is exceptionally well written, believable, elegant - whether the characters are speaking street slang or refined English and the depiction of the men is utterly believable - salty, profane, sometimes callous and convincingly masculine (i.e. obsessed with women and competitiveness). Edugyan has an amazing ear eloquently evoking the gentle, formal diction of Ernst's father the prickly industrialist or the rougher, street smart slang of Chip.

In fiction, we rarely read about men, main characters, who do not succeed, who fail to achieve their grand dreams. Edugyan achieves something special here. She tells a tale of ambition thwarted, talent wanting ... and she still makes the story fascinating.