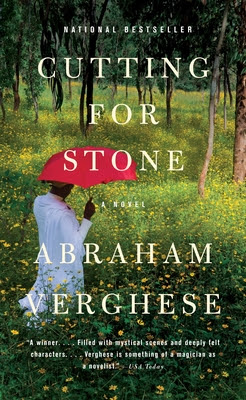 It was hard at first to pinpoint why Cutting for Stone left me so cold … the Indian diaspora in Africa, an illicit affair between a nun, Sister Mary Joseph Praise, and a surgeon, Thomas Stone, resulting in the birth of twin brothers Marion (the narrator) and Shiva and a number of ensuing dramas both in Ethiopia and in New York. Maybe that’s it. There is a surfeit of drama. It sometimes reads like a tragic opera or a Bollywood melodrama.

Consider what transpires during the course of the novel … a father abandons his sons; a main female character endures genital mutilation to curb her sexual inclinations; a woman commits suicide; the brothers are divided over one’s devotion to a woman; a main character engages in terrorist activities; one brother requires a liver transplant which the other brother provides then promptly dies; the surgery is done by the surgeon father who had abandoned the boys at birth; and, this is only a small portion of what happens.

Abraham Verghese, who holds prestigious positions as Professor for the Theory and Practice of Medicine at the Stanford University School of Medicine and Senior Associate Chair of the Department of Internal Medicine, is an accomplished writer with an assured style. He employs his medical knowledge extensively throughout the novel. This makes sense in that many of the characters are doctors – Marion and Shiva, like their father as well as their adopted parents, become physicians. But perhaps this is done too liberally…

I found myself drowning in the technical details of the medical procedures and surgeries. The novelist’s job is to pull you in with the description not overwhelm you with proof that the writer is an expert in this area. This is tricky for writers … a very fine line to walk.

The book does offer us insight into the life of Ethiopians under Emperor Haile Selassie (Verghese lived in Ethiopia for a time), a perspective we don't often hear about. A fellow book club member raised an interesting issue during our meeting: is all fiction written by a "colonial", per force, about colonization? In this case the perspective is further muddied by the fact that the South Asians, depicted here, serving as surgeons and doctors, are in positions of power over the Africans they treat. The traditional colonial dynamic where Indian peoples are subjugated is reversed.

Marion, as he is the narrator and main character, is fully fleshed out, introspective and sensitive, but his twin Shiva is an enigma, a blank for the reader. The female characters suffer similar fates: Sister Mary Joseph Praise is presented as saintly and sweet but utterly hollow. We learn only of her devotion to God and then Stone – but what motivated this young girl to give up her celibacy to Stone? One reader suggested that we never learn if their union was consensual, an interesting conundrum that I had not considered. Hema, the boys' foster mother who is also a physician surgeon and saves the boys from death, suffers a similarly saintly representation.

On the other extreme we have Marion’s love interest, Gennette, who is an unpredictable, difficult “bad girl” and chooses a very tortuous path in life. We never fully understand her motivations.

It is inexplicable that a trained doctor like Marion would have unprotected sex with Gennette who has lead a dangerous and unsavory life. The only reason, in terms of the mechanics of this novel, is to create the crisis that serves as a denouement: the hero becomes dangerously ill with hepatitis; his brother Shiva offers a portion of his liver to save him; the father, Thomas Stone, who abandoned them performs the operation. One twin is saved, the other perishes.

In the end I had to agree with the Kirkus reviewer who thought the book operatic in the extreme and the medical info distracting from an appreciation of the plot.

You may read the first chapter here.
Posted by A Lit Chick at 8:30 AM