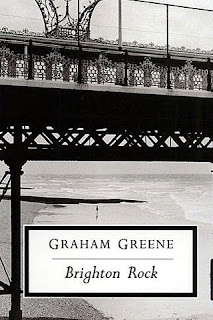 Graham Greene's book is an excellent example of 1930s British noir. Pinkie Brown is a seventeen year old "boy gangster" running a mob of much older men in the seaside resort of Brighton, England in the 1930s. At first his criminal doings remain obscure. His brutality does not - he is quick to eliminate people whom he perceives as a threat to his business. He soon becomes of interest to Colleoni an older, more successful mobster who wants to get rid of the competition if he can't enlist Pinkie as a minion.

When Pinkie fears that sixteen year old Rose, a local waitress, might reveal his involvement with the murder of Fred Hale, who assisted a rival gang in killing Brown's predecessor Kite, he is quick to court her with the intent of either marrying her or killing her to shut her up.

But Pinkie has a nemesis, Ida Arnold, a shrewd, flame-haired Brighton bar maid, who knew Fred very briefly and wants to determine the real reason he died. Officially, he died of natural causes but Ida doubts this and begins to ask questions first of the police, then of Rose who was the last to see Fred in the restaurant where she worked. Ida is like a "warship going into action, a warship on the right side in a war ..." He describes her as large, brassy, formidable, with a voluptuous figure and bust line. Ida is a good time girl who relishes simple pleasures (among them sex, alcohol and a few pounds in her pocket):

Life was sunlight on brass bedposts. Ruby port. The leap of the heart when the outsider you have backed passes the post ... Life was poor Fred's mouth pressed down on hers in the taxi ...

Pinkie Brown is a post WWI figure of juvenile male menace in an environment peopled by outsiders, "losers" and the impoverished. As the British writer Jake Arnott describes this type in "Mad, bad and dangerous to know", The Guardian, July 20, 2002:


I remember when Johnny Rotten first appeared, full of anaemic fury; with the shock of recognition we knew at once who this sickly youth was. It was Pinkie.

Pinkie is belligerent, smart but unschooled, angry, frustrated, prone to violence, absolutely committed to getting what he wants by whatever means necessary.

Pinkie is a strange character; Greene never reveals to us how he got into crime. But we soon learn his most intimate quirks and fears. He actively dislikes women, seeming to intensely fear the physicality of sex and intimacy. The longevity of marriage, the process of birth, the cycle of life, repel him. The idea of being with a woman literally nauseates him and he courts Rose grudgingly and roughly. Rose, shabby, poor and plain, is only too happy for the attention and quickly succumbs to Pinkie's harsh dictates and requests for secrecy.

Greene describes Pinkie in this manner:
The Pinkies are the real Peter Pans – doomed to be juvenile for a lifetime. They have something of a fallen angel about them, a morality which once belonged to another place. The outlaw of justice always keeps in his heart the sense of justice outraged – his crimes have an excuse and yet he is pursued by the Others. The Others have committed worse crimes and flourish. The world is full of Others who wear the masks of Success, of a Happy Family. Whatever crime he may be driven to commit the child who doesn't grow up remains the great champion of justice.
Ways of Escape (1981), Graham Greene, pp. 56-57, 61

Pinkie slowly begins to do away with all those surrounding him who know of Hale's death: Spicer, an older criminal colleague who lives in his boarding house, and then Rose, growing increasingly paranoid that she will tell what she knows. Because Ida keeps trying to convince Rose to leave Pinkie, Pinkie thinks that Rose is about to turn.

Firstly, he convinces the underage Rose to marry him at the registry office (after offering her indifferent parents twenty pounds for their "permission"). Pinkie and Rose return to Nelson Place, a neighborhood where Rose resides with her parents. Pinkie has an absolute horror of their home which, it appears, is not much different than the circumstances in which he was raised. They are poor, the home is slovenly and unkempt. The parents seemed inured to their own degradation and squalor which elicits a sort of horror in Pinkie. He has done his best to leave Nelson Place. Pinkie's disgust with Rose's origins (and his own) fill him with rage. He literally cannot stomach their presence.

His horror of the domestic is underscored by his visit to his lawyer Prewitt's home. Although Prewitt is visibly more prosperous than Pinkie and the gang, Prewitt's domestic situation represents a kind of hell for Pinkie and the reader. The house is by a railway line and the house shakes violently; the neighbor's radio is intrusive and annoying; Prewitt's wife resides in the basement like a sort of frightening troll, glaring at passersby - in her own kind of purgatory, reviled by her husband and hidden from the public.

After Pinkie and Rose marry, the couple wanders the boardwalk forlornly. The girl is utterly passive, putting herself entirely in her new husband's hands. Pinkie tries to get a room at the Cosmopolitan, the fancy hotel that Colleoni resides in. The clerk takes one look at his youthful face and shabby attire and spurns him which pushes Pinkie into a rage. In the end they grudgingly return to the boarding house that he shares with the rest of the gang. The honeymoon night passes swiftly (for Pinkie) and mildly painfully (for Rose).

At a loss as to what to do, she goes to Snow's, where she worked as a waitress, to show off her new found legitimacy and meets a fellow waitress who is envious of her married state, eagerly asking if Pinkie has a friend. Rose feels lucky, inexplicably so, the reader feels. The girl is so deprived of love and kindness that even the controlling, abusive attentions of Pinkie seem a welcome relief to her.

Unluckily, or luckily, for Rose, Ida Arnold is still trying to dissuade her from being with Pinkie, posing as Rose's mother to gain entrance into their home and trying to convince her to leave Pinkie. Rose is ferocious in her defense of Pinkie. When Pinkie sees Ida leave it seems to him that his worst suspicions are confirmed.

He realizes that Rose fully understands his role in killing Hale and Spicer. He decides that he will trick Rose into committing suicide by proposing a suicide pact. He wants to convince Rose to kill herself with the assurance that he will as well - that the gig is up and they should just end their lives.They have committed one mortal sin (marrying under false pretense as Rose is too young and therefore not really being married). Why not commit another (suicide)? he urges. He knows that this will appeal to any sense of guilt Rose has as a Roman Catholic.

He takes her for car ride to a secluded place. She is aware that he has a gun in his pocket and he is pressuring her. Ida is in hot pursuit having learned something of what Pinkie is up to. I will not reveal the end but Pinkie gets very close to what he wants ...

And this is England ... a certain side of the lower cast of England at a particular time between the wars but could apply to the punks of the 1970s or the yobs of today. Seedy, violent, unpredictable, rough. Greene had seen the future and it is coloured ... Pinkie.
Posted by A Lit Chick at 8:13 AM